Thoughts on the future of the real estate market of Tokyo

The future resale price of a property depends on demand: are there going to be people willing and able to purchase it? Let’s look into the forecasts affecting this. I will try my best to use official (government) statistics and forecasts, even if these are a few years outdated.

The population of Tokyo is still growing and expected to peak around 2030. The ratio of elderly people (65 year+) is currently 23%, and it is expected to grow to more than 30% by 2045. A different, 2019 study titled “Household Projections for Japan by Prefecture : 2015-2040” predicts that the number of households within Tokyo will follow a similar trend.

Predictions from the two studies above:

So the population as well as the number of households in Tokyo is expected to peak in 10 years and then decline, while the population continues to age. This will very likely put strain on the pension system: lower pension being paid, while the working generation will get taxed higher. Overall this will likely result in lower buying power for real estate.

Moreover I’m looking for a family-size home (3-5 rooms), and the need for those will likely decrease faster as the number of young people with families fall.

Side note on prefectures around Tokyo: the above statistics are concerned only about the prefecture of Tokyo, while many people who work in Tokyo commute from neighboring prefectures like Chiba, Saitama and Kanagawa. However the number of commuters outside of Tokyo only accounted for 18% of the population of Tokyo in 2010, so using Tokyo numbers is likely a good enough approximation for the Greater Tokyo Area.

The property market in Tokyo has been pretty hot in recent years reaching levels last seen during the bubble in the ’90s: 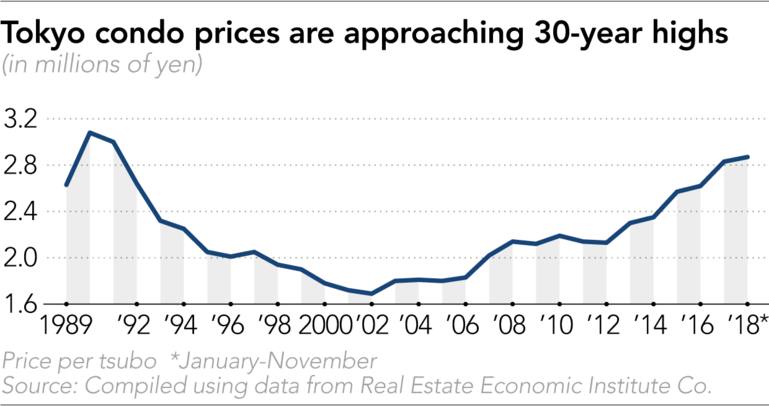 An IMF study on the Japanese real estate market

In 2020 the International Monetary Fund published a study titled Demographics and the Housing Market: Japan’s Disappearing Cities on the present and future of the Japanese real estate market. Below are some of their findings that I found interesting.

This can be largely explained by the fact that when the demand is going up, then developers can build new buildings, so the supply can increase too. However when demand is falling, supply will not fall so quickly. This is likely more true for countries with older houses, as in Tokyo very few people would want to live in a 20+ year old house that hasn’t been renovated recently, but based on this study it is also true for Japan in general.

This is the same thinking as looking at a hot market and expecting it to keep going up. Considering the significant portion of foreign investment into the Tokyo real estate, these investors might move fast on signs of prices dropping speeding up the process.

House price declines directly affect local governments by reductions in tax revenue from housing transactions. It would produce the second-round effect, quality and quantity of social spending in the area. This might accelerate population outflows, which further exacerbates the housing market and prices.

The article discusses this issue in relation to young people moving to large cities, however if the same situation would to come for Tokyo in 20-30 years, then highly skilled people will consider moving abroad, the same way many of their parents and grandparents moved from their villages to the cities. The same way this accelerated the real estate decline on the countryside, this can result in a similar effect for Tokyo.